If you’re reading this guide, then chances are high you’ve just purchased a new chainsaw. Another possible explanation is that your chainsaw has been out on lengthy storage and you’re trying to start the engine once again to accomplish some cutting tasks. Either way, this guide is right here to offer a detailed step-by-step procedure on how to start a chainsaw.

But, before we commence, it’s important to note that chainsaws differ greatly depending on the brand, model, and style. For instance, a Husqvarna chainsaw may have a unique way of starting up when compared to an Echo or a STIHL chainsaw. Since this guide will generally cover the gas-powered chainsaw and the electric chainsaw, it’s always recommended that you first read through your chainsaw’s manual to understand how exactly your specific chainsaw is powered.

How to Get Your Chainsaw Started

Read the Manual: Just as we’ve mentioned in the introduction part, the first step you should take when working with an unfamiliar chainsaw is to go through its manual. This way, you will be able to orient yourself with the machine in terms of its unique characteristics both on the parts and in the starting procedure.

Always remember that, though you may think that you know a lot about chainsaws, each brand and version is different from the rest.

Observe Safety: Chainsaws are machines. This makes them extremely dangerous especially considering the type of tasks they’re intended to accomplish. Since the cutting process involves dealing with flying sawdust and wood chips, an operator must wear protective gear when operating such equipment.

Some of the protective gear you should have include; cut-resistant gloves, eye goggles, a helmet, hearing protection, and the right footwear.

Go Through the Checklist: Now that you’ve read the instruction manual and you’re wearing the right protective gear, the next step is to perform a quick pre-check routine before you can start the chainsaw.

Now that you’ve done a quick routine check to your chainsaw, it’s now time to start the engine and get to work. So, if you’re ready, let’s fire up this beast.

Part Two: How to Start a Cold Engine on the Ground

Stabilize the Chainsaw: Since you’ll be starting the chainsaw while on level ground, the first step is to stabilize the chainsaw on the ground then maintain a firm grip by placing your right foot inside the rear handle while your hands press down the machine.

Activate the Brakes: Next, engage the brakes by twisting your wrist forward to push the brake handle forward. Most chainsaws, whether STIHL, Echo, or Husqvarna use this technique. By doing this, you simply lock the chain from spinning during the starting process.

Press the Primer Valve: Next, press the primer valve a few times (two to five times) until it stiffens with fuel inside. The function of the primer valve is to suck fuel from the gas tank into the carburetor to prepare it for combustion.

Activate the Choke: The choke is usually a switch or a lever located on the rear of the chainsaw. If your model has one, you need to push it up to help you start the chainsaw on a cold start. A cold start is generally starting the engine after staying for a long time since its last use. Some experts refer to the choke as the master control lever.

Pull the Starter Cord: If you’re a beginner, this is the trickiest part of starting a chainsaw. In fact, this is where most people get it all wrong. First, grip the handle of the starter rope and pull it slowly but in a steady motion several times until the engine tries to fire (but fails).

When this happens, adjust the master control lever/choke up by one position. This will take it halfway to the warm start setting. Using the same technique, hold the handle of the starter cord and pull it slowly and steadily. After a couple of pulls, the engine will start.

As soon as the engine starts, press the throttle to accelerate (rev) the engine. At the same time, set the choke to the idle position then leave the chainsaw on its own to continue running freely.

Disengage the Brake: As the engine runs, disengage the brake by pulling the brake bar towards you. Once you’re done, lift the chainsaw slowly while making sure there’s no one nearly and get ready to work.

Part Three: How to Start a Warm Engine

When you’re starting your chainsaw when it’s hot (after being switched off for a short while), then you’ll need to follow the steps above but omit the step where you have to activate the choke. The reason for this is simply because the engine is already primed with fuel. However, the rest of the steps, including the safety measures, must be followed to the latter.

Secure Your Footing: So, if you’re in a situation where there’s no even ground to place your chainsaw, there’s an alternative technique you can use to start your chainsaw without exposing yourself to any risks. To do this, you need to clear the debris around the area to keep your feet stable.

Hold the Handle Firmly: There are two steps here. The first one is to brace the rear handle against your body (on knee level) using your thighs. The second step is holding the handlebar firmly with your left arm while the right arm tries to pull the starter rope. From there, you can follow the entire procedure in our second part just above.

Now that we’ve discussed how to start a gas-powered chainsaw, our last section is dedicated to owners of electric chainsaws where we’ll discuss how to safely start such chainsaw models. If you’re ready, then let’s begin.

Inspect the Chainsaw: As usual, the first step is always to inspect the chainsaw to ensure that everything is in order. In this step, you’ll also need to wear your safety gear such as your helmet, goggles, leather gloves, and the right footwear. You should also read the instruction manual carefully to ensure that you’re well oriented with your specific chainsaw model.

Go Through the Checklist: The next step is to conduct a thorough inspection of the chainsaw before starting. In this step, you’ll need to check the chain’s tension to confirm whether it’s too loose or too tight. In case it requires some adjustments, you need to follow the right procedure for tensioning to avoid damaging the chain.

Next, confirm that the bar and chain oil reservoir is full before connecting the cord. This is a very critical step that requires you to refer to the instruction manual to determine which oil is compatible with your specific chainsaw model. Thankfully, most electric chainsaws work well with the SAE 30 oil so you don’t need to panic.

Connect the Power Cable: One drawback with electric chainsaws is that they don’t come with an extension cord/cable. You, therefore, have to buy one and connect it yourself. This, by the way, is usually the trickiest part of owning an electric chainsaw. Since not all models are the same, you have to consult your instruction manual to figure out the exact type of extension cord that will handle your chainsaw’s amperage.

You also have to ensure your home’s power outlets are sufficient enough to provide enough voltage to power your chainsaw’s motor.

Find the Right Balance: Before you get to the next step, you need to first ready yourself by finding the right standing or seating position. Make sure there’s no one around you, especially kids, as this can result in possible accidents caused by human error.

Pull the Safety Hand Guard: Gas-powered chainsaws rely on the handle brake and the throttle lock as security measures. For the case of an electric chainsaw, the handguard and the trigger switch lockout are what protect the chainsaw from engaging accidentally. In this situation, you’ll need to first pull the handguard towards the handle.

As you can see in this step-by-step guide, starting an electric or gas-powered chainsaw isn’t that difficult provided you use the right technique. In this guide, we’ve mentioned everything that’s needed to get you started right from the first step. To avoid injuries, it’s prudent that you first wear the right safety gear and always read the instruction manual of any chainsaw you’re not familiar with.

By doing this, you’ll keep safe and during the process, you won’t damage your beloved chainsaw by starting it up the wrong way. Remember, your chainsaw is an expensive investment that needs maximum care to last longer. 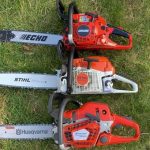 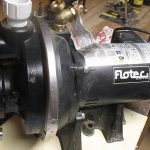 How to Tell if Your Well Pump is Bad

What Size Kinetic Recovery Rope Do I Need?

How to Change Headlights