If you’re seeing the micrometer for the first time, then I believe you must be asking yourself “What on earth is this thing”. For those of you that are fans of Hollywood thriller movies, then you might confuse it with one of those torture tools used by serial killers to brutalize their victims. But, if you happen to ask any mechanical engineer, mechanist, or just someone working in a technical field, then they’ll tell you that a micrometer is one of the must-have tools in any engineer’s toolbox. So, whether it’s for curiosity or you’re just an intern looking to polish your mechanical engineering skills, learning how to read a micrometer is one way you can advance your career to the very top.

Now, at first glance, a micrometer looks like a complex tool with multiple calibrations on its moving parts. However, it’s due to these calibrations that make this tool so efficient in recording inner and outer measurements of varying objects. But, despite being so accurate, micrometers require a high level of understanding of its working principle. Due to this reason, this guide has readied an insightful piece of information that will help you learn how to read this engineering tool.

Why Consider a Micrometer?

There are many reasons why engineers consider micrometers over dial and vernier calipers. One of these reasons is the different variations of the micrometer that are available that allow you to take accurate measurements of either the internal or external diameter of an object. They can also measure the length and depth of an object provided it fits in between the anvil and the spindle.

Other than that, micrometers come in either standard or digital variants. They’re also classified according to the principle they use to record measurements such as metric and imperial. Lastly, micrometers are believed to be very accurate due to their ability to adhere to the Abbe’s principle.

Therefore, by following the Abbe’s principle, a micrometer is capable of taking accurate measurements of up to one ten thousandths of an inch. With that said, here are some real-life applications of a micrometer.

Now, a micrometer is a measuring tool that’s widely used in many working fields such as engineering, mechanics, machinery, laboratory, and construction. To make it easier for you to take measurements, this tool comes in different sub-divisions with the most common ones being the outside micrometer, inside micrometer, caliper-type micrometer, tubular micrometer, and depth micrometer.

So, with that in mind, this guide will now highlight parts of the micrometer before moving on to discuss how exactly you’re supposed to read a micrometer.

Parts of a Micrometer

How to Take Measurements

Taking Measurements Using an Outside Micrometer

Taking Measurements Using an Inside Micrometer

How to Read a Micrometer: A Complete Guide

The inch micrometer is designed with calibrations both on the sleeve and the spindle. The scale on the sleeve is measured in a one-hundred thousandth of an inch which is represented by 0.100 in decimal form.

Now, one turn of the thimble moves the spindle face away or towards the anvil at exactly 1/40” which is translated to 0.025”. This means that the distance between two shorter lines on the sleeves is 0.025 inches.

The thimble isn’t left out either. It also has its own calibration with each line representing one-thousandth of an inch or .001 in decimal form.

With that in mind, it’s now time to record your reading. Start by reading the whole number on the sleeve. Supposing its 5, then you’ll round it into one-hundred thousandth which will make it 500 thousandth or 0.500.

Lastly, record the corresponding marking on the thimble that’s at least underneath the line on the sleeve commonly known as the datum line. Let’s assume the reading was 28. Since the thimble represents one-thousandth of an inch, this reading will be read as 0.028.

The readings on the thimble go all the way to 50 with each line representing a hundredth of a millimeter which is 0.01mm in decimal form.

Now, to record your reading, you’ll start by reading the whole number first which in our case will be a 5.

Next, read the half-millimeter lines that are showing after the whole number. Supposing its one line, then it would be 0.5mm.

As you can see, a micrometer is a reliable tool that allows professionals in various occupations to take measurements of very tiny objects which larger measuring tools would struggle to take. But, to be a professional in recording these measurements, you need to understand the psychology behind this measuring tool and most importantly, you need to understand the anatomy of the micrometer scale.

Thankfully, this guide has offered you everything you need to know about the micrometer. So, whether you’re a beginner, an intern, or just a curious learner, then the information I’ve offered is enough to kick-start your new career. 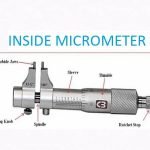 How to Attach Recovery Strap